Creating in a beautiful place is far better! 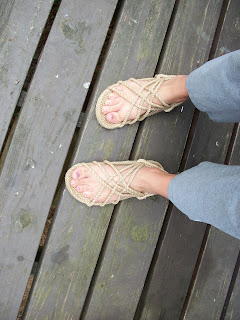 ﻿
﻿﻿I strung a few necklaces while out there - and I have to say I think they were the best I've made so far.  I don't know if it was the inspiring scenery or the natural light - giving me better opportunity to see what I was doing - but I was satisfied.  After going to "For Mother Earth" I found even more inspiration and created a necklace from the inspiration I felt there and I finally said, "okay, now this is clearly my signature on my art."  That felt good and it honestly surprised me!  So, I'm excited to share it with you.  I am noticing that there is this balance and these mini-seasons of Create/Prepare/Present.  I don't have time to do all at once.  So, bear with me as I've been creating...and thanks so much for supporting!!!!
Posted by jenna at 6:43 AM 1 comment:


﻿﻿ ﻿﻿ ﻿﻿ ﻿
﻿
﻿﻿ ﻿﻿ ﻿Our 16th Anniversary.
Headed to Mtn. Home, AR to enjoy the beautiful area and let our children spend some time with their grandparents.
After researching Resorts and Cabins that we could stay in to get away for a night or two - we realized that the weather predictions were amazing.  So, we loaded up some of our camping gear and borrowed the rest from my parents.
We headed out to Jordan, Arkansas, which we knew was closed for the season.  However, people can apparently camp there for free during closed season, though the water & electric are turned off.  Fortunately for us the toilets still had running water.  But that wasn't the best part.  The weather was AWESOME!  The views were amazing.  The solitude and quiet was beyond imaginable.
During the summertime (I've been there a few times) the place is hopping with families: fishing, swimming, vacationing, partying, etc...  So, the grounds, trails, and bluffs were well worn... but we had it all to ourselves.  It felt like the best gift ever - and it was free!  I think we stayed in awe and amazement the entire two days & one night we were there.   LOVE!
Posted by jenna at 6:45 AM No comments:

I began Unearthed Roots for two main reasons:  to share with you my roots and to allow you to follow along in the journey I am taking to discover them.  My roots, meaning both my earthly ones and my heavenly ones...most often entertwining.  My love of creating is definetly in my roots, so that is the more dominant theme here usually (probably stronger on my mom's side).  There are also things I know come from God alone (like my love of writing, for example).
Now, my dad's side of the family has roots that go way back and deep into the Arkansas hills.  I grew up listening to music being played by groups of family members.  I recall sitting on the floor many times as a child while they picked, fiddled, and sang away.  My favorite memory is when my Grandma cut the floor right there in her living room to the sounds of their playing.  She only did it once that I saw.  Most often everyone simply listened, appreciated & enjoyed the entertainment.  Growing up at the feet of those doing what they loved, in the foothills of the Ozarks, is a part of my heritage.  That's why you'll see in this post why I fell in love with this town and how it accomadates those wanting to share their gifts:

In a quaint little town right on the outskirts of the Ozark National Forest we encountered some of the most talented musicians I've ever heard!  ﻿
﻿ 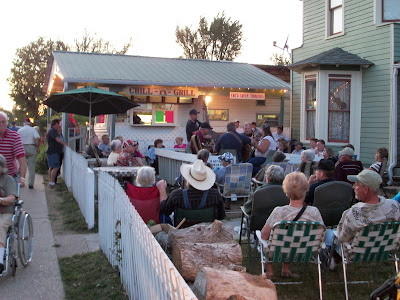 ﻿
I grew up only 35 something miles from Mtn. View (in Mountain Home) but I'd only been there a few times.  And never for a "pickin" night.  I'd have never appreciated it like I did last Saturday night.
﻿ ﻿﻿﻿﻿﻿﻿ ﻿ ﻿﻿ It is TRUE wholesome country goodness.  Groups of musicians come from around the area and set up wherever they can (sometimes it's on the edge of a parking lot) and play their music.  Listeners can set their chairs up to listen or just walk around.  I noticed that a lot of people moved their chairs around to different music stations to hear a variety.  Sometimes the musicians rotated.  There were dulcimers being played and other varieties of musical instruments that you don't usually see.
﻿﻿
﻿﻿﻿﻿

I wish that everyone had a chance to experience the atmosphere and talent in Mountain View, AR!  You might be  surprised at how enjoyable it would absolutely be!
Posted by jenna at 6:37 AM No comments:

Our Road Trip to Arkansas

﻿ ﻿ ﻿﻿ ﻿﻿I really wanted to head to the Ozark Folk Center next...but how could I ask them to leave?  They were enjoying themselves so much, that it just didn't seem right to ask them to do what "I" really wanted to do.  They would have liked the Center too...but I guess we will save it for our next trip.  We did get to go on a Ropes Challenge at Loco Ropes and it was challenging!  Mom has all of those pictures though.  I'll post them when I get them, which won't be soon--because she is keeping all of my three favorite children right now!  Ha!  Oh yeah, I better get back to work!  Amazing what one can get done with less people around.  I'll appreciate it now, but I'm already looking forward to their return!
Posted by jenna at 12:35 PM No comments:

Overwhelmed with a preschooler? Create Play-Dough 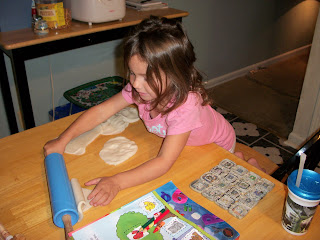 A few weeks ago I was exhausted.  Not physically, but emotionally.  I'm not blaming this entirely on my three-year-old little Cutie, but I will say that my word limit had been reached (both speaking and listening) by probably 10am...and all I could think was "we have the rest of the day to go..."
Near tears, (not joking) with a strong desire to clean something, I sat down and put my head in my hands.
What to do.
Got up to put dishes away and invited Cutie to help.  We were putting the roller away and she asked, "can we use this and make bread?" 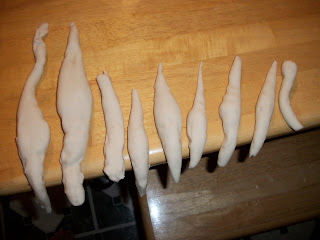 Great idea!  But instead of bread I pulled out an oooooooooooold recipe from a cookbook I've had for many years and we cooked the Play-Dough together and Wah-Lah!  TWO HOURS she played with this stuff!  NO JOKE.  We have an idea to make them for all of the party attenders for her birthday party next month...if we are so motivated. 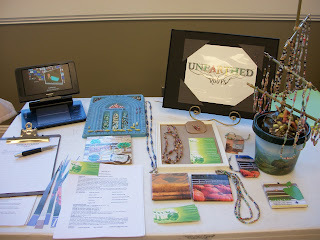 In more business-related news...here is my table at my first Expo Event.  I've never done a craft fair or anything...so this was brand-brand new.  I wasn't sure how it would go, but I just wanted to show interested people about the ways that I recycle things to make my own art designs for usable purposes.  I actually loved sharing and talking to everyone who stopped by my table.  Because I loved it and can see myself doing something similar in the future, I may look into opportunities to attend more craft fairs and the Downtown Market.  No one was really interested in the Video Productions...but I may be a little ahead of my time on that.  It's too bad, because I think families (and future generations) would appreciate such video preservation.  Oh well, more time to create for me!
So, a few more pictures of our recent Fall happenings:

Email ThisBlogThis!Share to TwitterShare to FacebookShare to Pinterest
Labels: Creating

﻿
﻿It's beautiful outside.  I love this time of year...maybe because I know that it's such a short season- the leaves turn such beautiful colors then fall.  Happens every year.  This is our first year watching the seasons change while using public transportation...and let me tell you it has been eye-opening!  The colors are amazing, just to ride and watch the view, I love it!  This year I've noticed more flowers than I've ever noticed before.  I had no idea how bright Fall flowers can be!  So many people have them in their yards - and there are a lot of wildflowers in the Fall - bright and glorious!  I've been showing Brielle on our bus journeys and she is paying more attention  too.  We ooooh  and aaaaah over the leaves that are actually falling...it's like poetry in motion...to use my favorite description.

Now there are a lot of reasons I like to take public transportation.  But I never cease to be surprised at the new ones!  Yesterday, we were taking the bus home, and a blind man (with his seeing-eye-dog) boarded the bus.  He didn't even know for sure if he was getting on the right bus, but turned out not to matter which one he got on, because they'd all eventually go to the Transit Center, where he'd be getting on the bus he would need to get to the opposite side of town.  I calculated it would take him at least ninety minutes to get there from that point.  Wow.  He felt all around him, so as not to sit on someone or something, I'm sure.  Then he sat down, the dog laid down, and Brielle started asking questions about why a dog would be allowed on the bus.  Seemed like a great opportunity to explain to her about the uniqueness of this guy and his dog.
When her curiosity settled, I began to relax and look out at the scenery, and back to this man, who was clearly in his fifties, with long gray hair pulled back with a band, hat on, weather-tanned skin, rough face, and seemingly content in his blind world.  He would occasionally reach down and make sure the dog was out of the way of the isle.  Once he put his wrist to his ear to "hear" the time (I assumed).  But mostly he just sat there and looked straight forward, like a blind person probably would, listening to all of the sounds around him.
I thought to myself two main things:

1) Wow, do we take so much for granted.
2) I bet he has a load of wisdom to share and stories to tell.
I looked around at the Fall colors and thought....how much do I take for granted Every. Single. Day?
How could it be different?  How could we live fully engaged and thankful- Truly Thankful- for each moment and gift?
Ironically, observing the blind guy --- helped me to see.

Love this New Blog my friend just launched: Schnibbles & Bits: Oatmeal Carmelitas and Neighborly Love: We've lived on our street for about a year and a half and it took longer than expected to get to know the neighbors, but when I finally got...
Posted by jenna at 1:03 PM No comments:

What do you love most about Fall?
Posted by jenna at 10:43 AM No comments:

Promote Your Page Too

Let your roots grow down into him, and let your lives be built on him. Then you will grow strong in the truth you were taught, and you will overflow with thankfulness. Colossians 2:7